Every year from 1974 to 1992 Leslie and I visited my retired parents in Vero Beach, Florida, during  spring training. The Dodgers no longer train there but the memory lives on. Photos are great but her drawings on back of plain postcards capture how stars seemed like friends and fields of green grass felt like your back lawn. 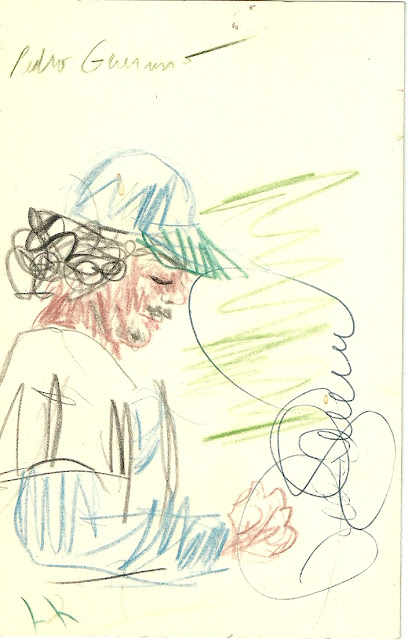 An autographed drawing of Pedro Guerrero giving an autograph. The slugger did a double take when asked to sign the drawing. No wonder he was a good hitter. 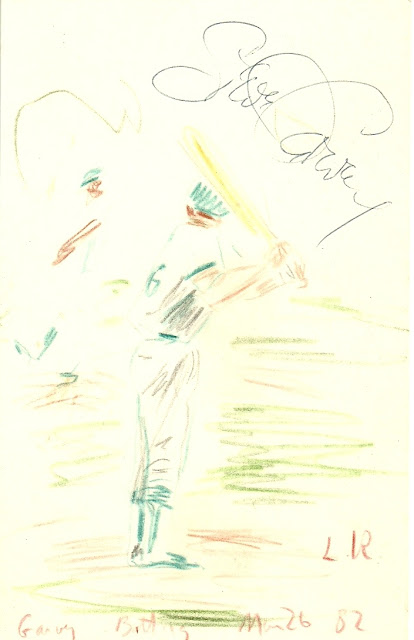 Steve Garvey at bat. He always expected everyone to look at him and always had a pleasant smile on his face. 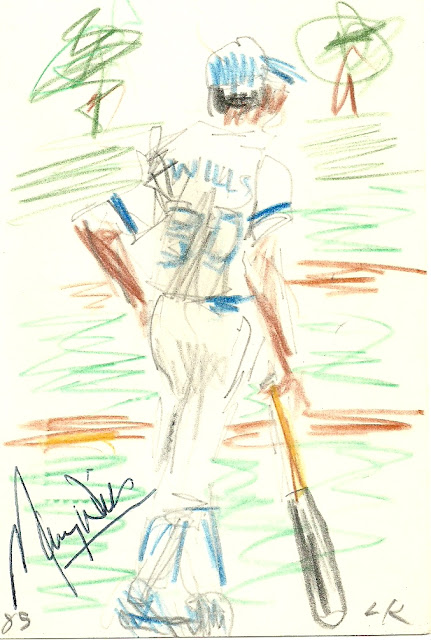 Maury Wills, the great base stealer, always had an audience around first base. We thought he would be a great coach or manager. That year Davy Lopes seemed to be Wills' major project. Lopes is now a great first base coach. 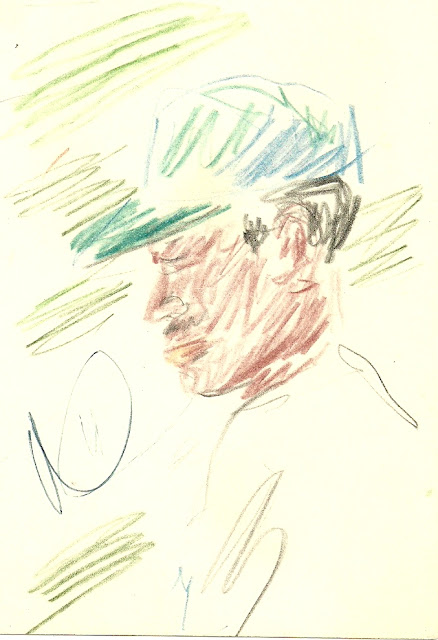 Manny Mota, the great pinch hitter, had the most well thought autograph. Trouble was they sold us a ballpoint that didn't work so Manny's "M" is blurred and his "O" a bit out of control. 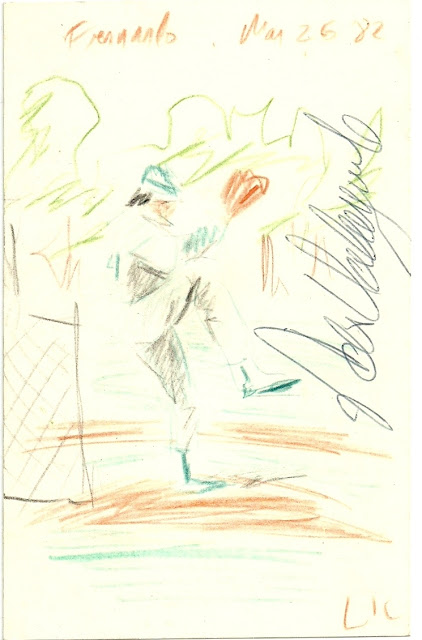 Fernando Valenzuela became Leslie's annual spring drawing. Here he is in 1982, the year after he won Rookie of the Year and the Cy Young award 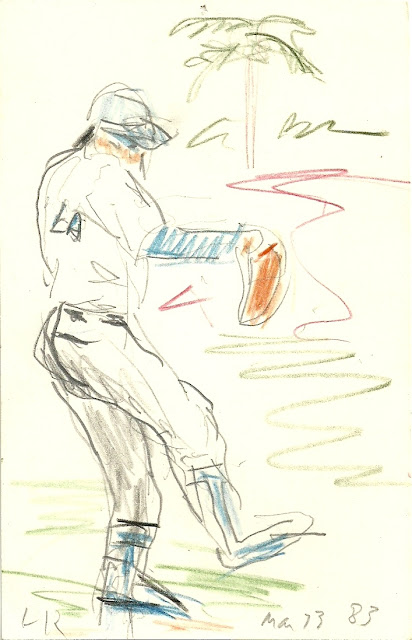 She didn't get his autograph in 1983; can't remember if it was because Fernando was a very big deal by then. There is an "LA" instead of a number on the jersey so maybe he was wearing a practice jersey. This is a very good drawing, easy to see why batters didn't want to face Fernando's screwball 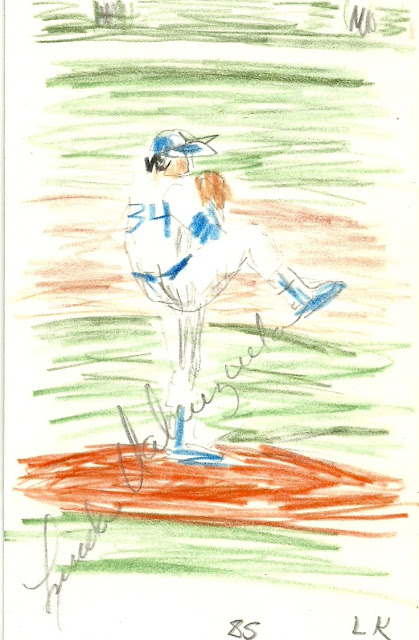 The Tokyo Giants twice joined the Dodgers in Dodge Town 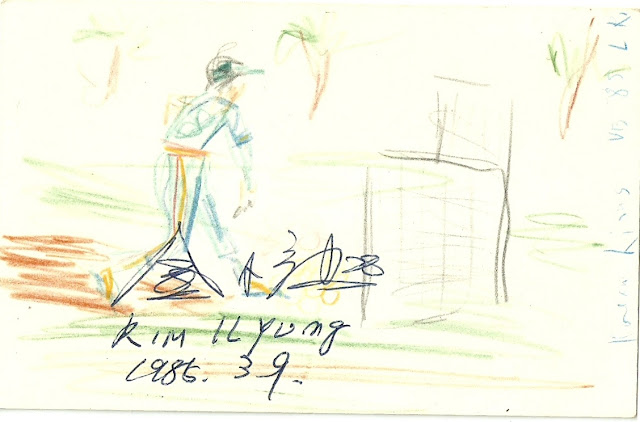 During their earlier visit, she got Sadaharu Oh's autograph. He hit 868 home runs. 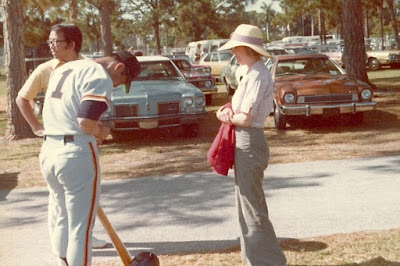 The drawing below is of two Giant catchers 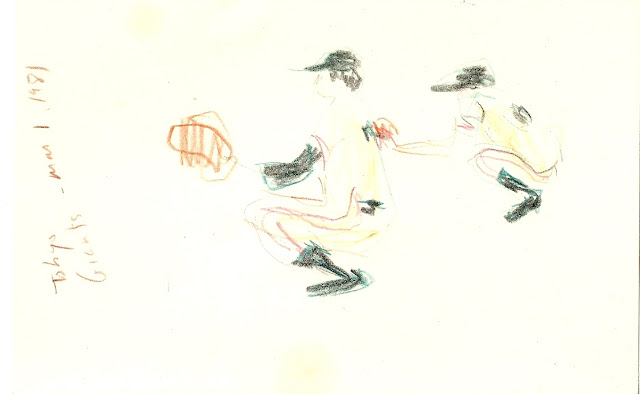 Who were not unlike the terns at the beach 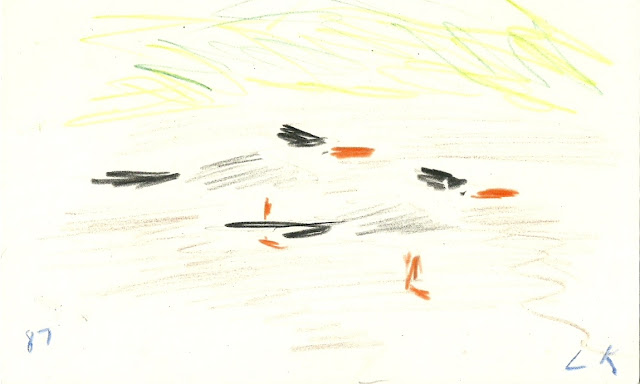 Only good memories of Dodger Town, especially with
Sadaharu Oh at bat looking like Mel Ott 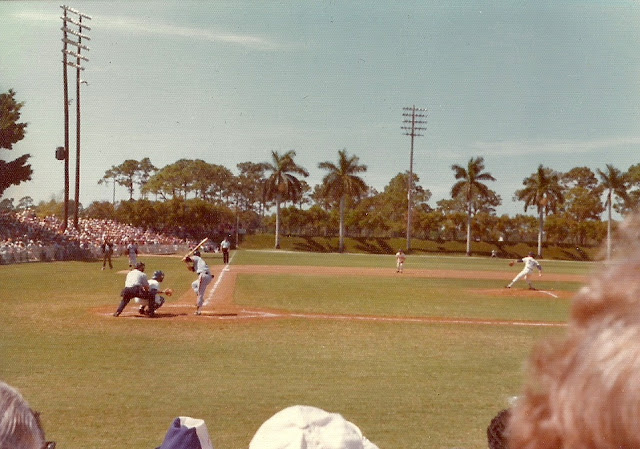 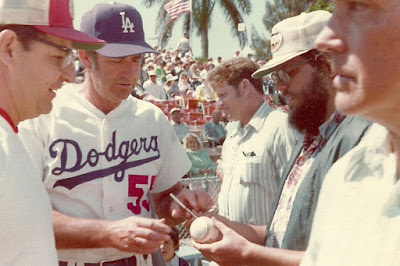 And at Vero Beach I learned I was not cut out for baseball. During the 1976 lockout that delayed spring training, Leslie saw Joe Ferguson on the beach and learned from him where the boys were practicing on their own. We dropped by. I think that Garvey and Dusty Baker are in the poor photo below. 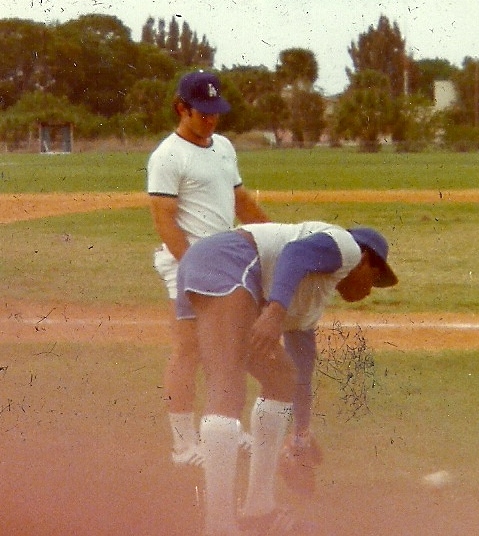 And I think that is Davy Lopes at the plate. Obviously he wasn't wearing a number. I cropped most of the Vero Beach high school players in the background but kept the glove in the foreground. The players, only about 6 or 7, were amenable to fans going out into the field to help shag the flies. Not me. Don Sutton was throwing easy pitches and the resulting line drives were blistering and the grounders ball breakers. No way did I want to get in the way of them. 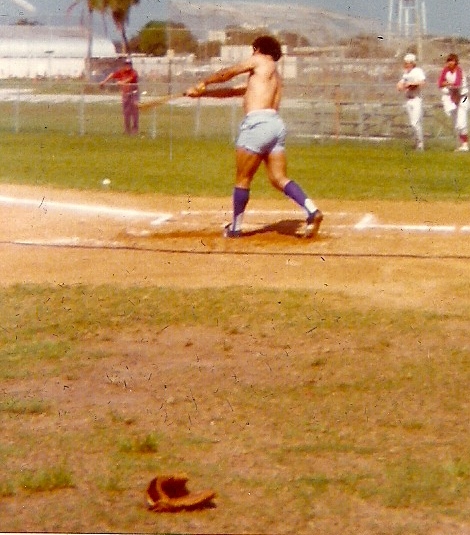 Leslie's favorite baseball pose is the catcher crouched down ready for the pitch. So she signs off with drawing of one, Don Crow, a rookie who didn't make it, which, unfortunately, is what spring training is basically all about for most players. 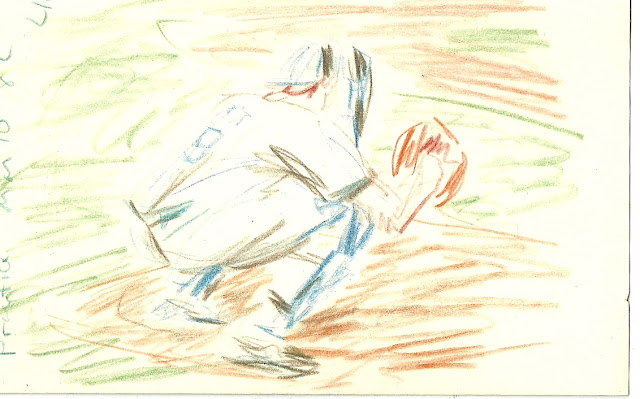