Death of a Beaver 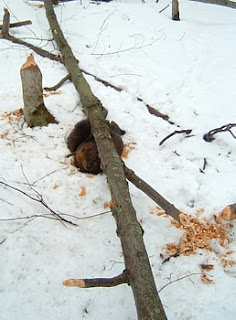 There was no mistaking what happened. Double murder. The beaver killed the tree. The tree fell on the beaver. I've seen a thousand trees cut down by beavers. I never saw this before. The beaver must have died instantly. The trunk was hard and square on its head. 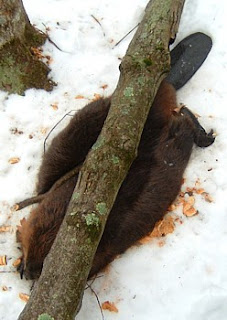 I had a long acquaintance with this beaver. At first I told myself that it was a yearling, one of the three new recruits to this favorite colony of mine. But the tail measures a foot long. That's an adult. My son was on break from school and came with me to see what happened to this beaver now that it was dead. It's not easy telling the sex of a beaver. I put on a latex glove and had my son hold up the log, and I put my finger up the only hole I saw. The books say the male beaver's penis is hidden in that hole. I didn't feel anything like a penis. I got the sinking feeling that this was the matriarch of the colony, the mate and mother of all the beavers I had watched along this watershed for the past seven years or so. Can't be sure about that but I think I am right. I've watched this colony when it was in the Short-cut Trail pond, then Meander Pond, then Thicket Pond, and the name of the pond she died in -- and I've called it this for twenty years -- is Shangri-la Pond. No one's supposed to die in Shangri-la. Can't be sure about this, but I think the last time I saw this beaver she was keeping a kit from coming up on the ice. I don't know why. Perhaps she was afraid a tree would fall on it.

When we came back to see the beaver the second day, we noticed that the other beavers -- well, what could they do? have a funeral? They cut another log off the tree that was on top of her. 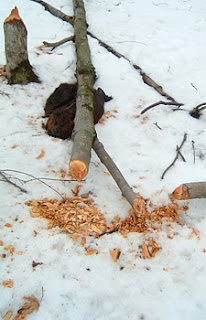 Beavers have a funny way of cutting trees, and I say that with a good bit of sympathetic knowledge. I cut dead trees for firewood and cutting the big ones always gets my heart beating fast. I make an angle cut -- I never use a chain saw. I use an old fashioned hardwood saw. Once I found myself cutting a thick maple with a cut that didn't angle enough. I figured I could push it the way I wanted once I cut enough. I had my head down plotting the next move of that strategy and the tree simply fell over. Obviously not on me because I'd be dead. Beavers don't cut at angles. They keep cutting around the tree bringing the thick trunk down to a thin link between two feet of soon to be stump and 20 to 50 of soon to be beaver food. They eat the inner bark. Beavers don't push the tree down -- like I usually do. They sense when the tree is about to fall and they leave, quickly, and wait for the wind to blow the tree down. I have a video clip of this which is a bit long, but I share it because she might have cut this tree back in the fall.

Get to the end of the video clip and you'll see how the beaver senses the tree moving, and trots back to the pond. Now, beavers know their business, but given how the world slants toward flowing water, gravity would tend to make the tree fall toward the pond. That didn't happen in this case. The wind blew it down in about ten minutes, to the right, and the beaver went back and started cutting it up. It did happen later. The tree fell conveniently down toward the water and on top of the beaver.

This is going to be a long story. There is about two feet of snow outside. I have time. Tonight, I'll finish an episode by describing the last time I think I saw her. She was up on the snow, only four inches back then, gathering branches from cut trees. Her kit was back in the canal. The first time that kit had experienced ice and snow, and once it had solved the problem of swimming from the lodge about twenty yards under ice and then swimming up a canal another twenty yards under ice, well when it got to open water, it was eager to get out. The mother beaver wouldn't let it, chased it back into the canal and then she set herself up as a guard, sat on the ice and stared at the kit. Who knows, a few days later maybe she ran down the bank just as the tree fell to keep that kit from coming up again.

But before I end the story for tonight, I should tell you what happened to her body. We came out to check it every day or so for almost two weeks and marveled that only the mice seemed to find a meal, nibbling on her back foot and tail. 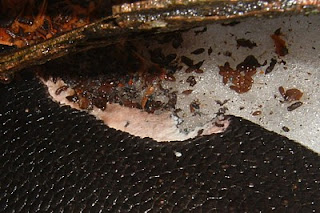 Then one day she was gone, clean gone, and during a thaw so we couldn't see any prints. Could some person have cleaned her up? She was about thirty yards down from a trail. But two days after that we came back and saw that a coyote left its regards where the corpse had been. Coyotes like to show off that way. 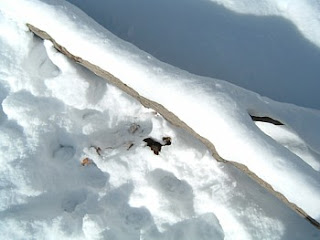 So almost a month after she died, she became a complete meal. Meanwhile the beavers didn't come back to the tree that killed her. A much larger red oak fell down closer to the lodge and they dined off it. My project for this rest of this year will be to figure out what her death means to the colony, her mate and offspring. Can't say yet. Winter has been active and as I write they are snug in their snowed over lodge 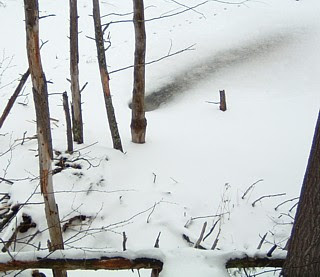